Hi there. Thanks for coming!

I’m Sergio. I live in Tenerife ️ and currently I’m working as a data engineer at the Canary Island Statistics Office . I’m also quite involved with IT teaching .

Checkout out below some of my active projects.

I’ve built a free online course to learn the Python programming language with a practical approach, including exercises and coverage of different levels. Only spanish! Sorry.

I’m an active customer of Amazon. Deliveries to Canary Islands usually have some issues, though. On one hand, some goods can be charged with customs duty. On the other hand, some products are not eligible for shipment to our region.

For the first point I’ve built a kind of calculator of delivery costs. For the second problem we’ve developed a cross-browser extension for quick identification of Amazon products with shipping restrictions.

I’ve collaborated with two colegues in scientific topics. The first one has to do with extracting haplotypes from DNA sequences. The second one is a set of utilities for Crystallographic Information Files.

To easily access all of the educational news from the Canary Government, I decided to automate the streaming of information through a customized service. You can achieve this thanks to this Telegram channel operated by a bot.

As I said before, I’m a big fan of dancing. I created a website with tons of salsa videos from our dancing course.

I like playing around with 3D modelling and sketching. Here you can find out some of my designs.

Although most of the photos nowadays are stored in our mobile phones, I usually take some out and upload them to a gallery site. Here you can find photo albums of my travels.

Once in a while I used to create logos. Take an overview of my designs. 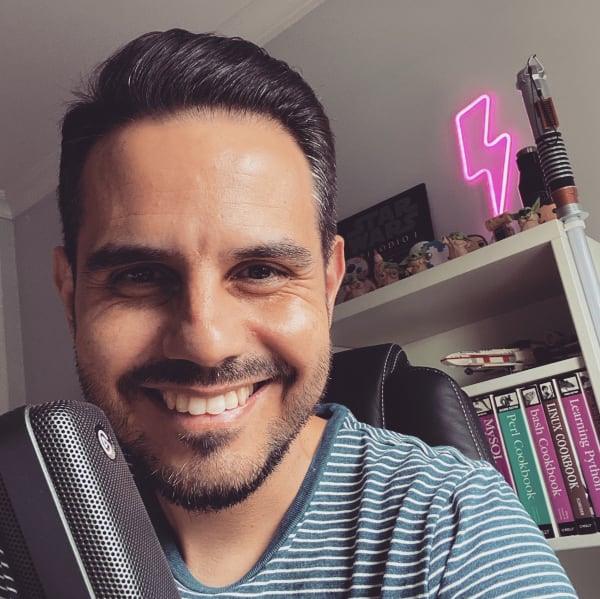 I was born in La Orotava (Tenerife) back in 1979! I started loving computing quite young when I used to visit one of my father’s friend. I remember he got a Commodore Amiga and I spent hours fooling with the MS-DOS on Windows 3.11.

Highschool was one of my best stages so far. There, I met very good people and I discovered interesting subjects and fields of knowledge. My passion about computing grew in front of my eyes. I fondly remember IES Rafael Arozarena.

It was obvious that I was going to study Computer Science. My time at University of La Laguna was intense but also very hard. There I figured out the dimension of what programming is: a non-stop learning journey. Fortunately I could meet there great teachers that showed me some right paths.

Languages have played an important role in my life (not only the programming ones). Maybe this affection comes from my mum. In an earlier stage I finished English B2 Level at EOI El Mayorazgo. After some years I choose to leap on German B2 Level at EOI Puerto de la Cruz.

I can not understand my career without teaching. After overcoming my academic degree I decided to take the educational road. I could pass the official tests and got my position as teacher of higher IT studies at IES Puerto de la Cruz - Telesforo Bravo. Furthermore I had the chance to get involved in EOI as teacher of IT courses. I combine both teaching activities.

Programming is a fascinating stuff for me. A set of great tech tools that lets you create something new from scratch. I really love it. Fortunately I have been able to learn different programming languages, but life changes when Python appeared on the scene. Wherever you are, thanks adsaman for being my mentor. I am cofounder of Python Canarias.

When I finished my degree on Computer Science I started to collaborate with Instituto Canario de Estadística (ISTAC) developing a statistical software. It’s curious that 15 years later I could resume this link. From 2020 to 2022 I worked at ISTAC as a data engineer.